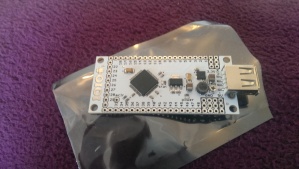 Because I like experimenting with things, and because I love cool toys, I’ve decided the time is right to build myself a drone quadcopter.

I’ve played around with RC ‘copters before, and my electronics knowledge is fair (if a little rusty), so I’m not too worried about the actual build (he said, naively). The bit I’m really looking forward to is the software.

I’m still very much in the planning stages (so far I’ve bought one bit of hardware – see pic right). The main goal for this drone is that it will not be radio controlled. I want it to be totally autonomous, without any onboard RC gear at all. That’s right – I even want it to handle take-off and landing all by itself. A tad over-ambitious? I guess only time will tell!

That’s all for now on the drone front, but stay tuned for updates as the build progresses. I’ll be posting here as things move on, and hopefully some day soon I’ll post a video of the maiden flight!

The sharp-eyed amongst you might already have realised how I’m planning to control my drone, but if not, then consider this: Where might I find a device that runs code, and has accelerometers/gyros, a compass, GPS, a camera and wireless network capability, all built in as standard?

This site uses Akismet to reduce spam. Learn how your comment data is processed.

Blog about the TTL based CPU design we're making

because anything is possible with Charisma

One stop shop for all your tech-filled pleasures!